Q: In your book Beyond Black, you argued that Beyoncé was the epitome of today’s celebrity-as-commodity: someone who has almost surrendered her humanity to turn herself into an all-purpose industry that can sell practically any product. There’s no doubt about that. But, after her apparently newfound blackness (as revealed at the halftime Super Bowl show, see above), I have a new question: can she sell the end racism?

A: There’s a short answer and a long one. Let me start with the short: No. Beyoncé Knowles-Carter is a phenomenon, someone who has lived her life as a business; every move she makes is scrupulously thought-through,  every decision is subject to rigorous analysis, every interview   she gives (and there are precious few) is subject to her approval. This is a woman to whom spontaneity and randomness are like crosses to a vampire. She likes control over every aspect of her industry — and she is an industry, of course. She can sell anything, whether Samsung phones, L’Oréal lipstick, American Express cards … the list goes on. Oh yes, and her own music, of course. Since 2006, when Destiny’s Child split up, she has sold 118 million records worldwide.

Q: But, as I recall, your argument was that Bey’s avoidance of getting involved in any social issue that is even faintly controversial is the key to her commercial success. You also said that all black celebrities have conditional status in the sense that they are kind of allowed to be successful on the condition that they don’t get talk too loudly about social issues. In particular about racism. This seems to have changed now. Beyoncé appears to have some sort of epiphany —  a moment of sudden revelation — and is prepared to define herself as black. This is something she’s never done before.

A: You’re right: Beyoncé has never openly described herself as black and has even explicitly denied that she is on the same cultural landscape as the rest of us. In a 2009 interview with Vogue, Jonathan Van Meter asked her “if she had ever experienced any of the racism in the music business.” She answered: “My father had to fight those battles. I didn’t. And now I’m large enough—I’m universal—that no one’s paying attention to what race I am. I’ve kind of proven myself. I’m past that.” Now she seems to have decided that the time is right to open up on this issue. In her new video Formation, she addresses the race issue, straddling a New Orleans police car, which eventually gets submerged (with her on its roof) And at the end of the video, a line of riot-gear-clad police officers surrender, hands raised, to a dancing black child in a hoodie, and the camera then pans over a graffito: Stop Shooting Us. She released the track just before her show the Super Bowl’s half-time; her performance was loaded with black power symbols and what some interpreted as a protest against the police’s treatment of blacks in America (see below).

A: And everyone in America and beyond knows about these killings and understands the ill-feeling they have created.  I think this is why Beyoncé has incorporated black emblems into her music: it became artificial for her to keep insisting racial issues didn’t interest her, or she transcended these kinds of matters. My guess is that her advisors suggested it was time for her to make some kind of statement, however stylized it may be. Rather than give interviews on the subject of police and black people, she’s woven them in her music and onstage performances. As a result, the world has been taken by surprise, Bey has attracted global publicity and she finds herself in a huge controversy — just as tickets go on sale for her world tour (it kicks off in Sunderland in June, by the way) and releases her new Formation album.

Q: Surely you can’t be suggesting that this is just a marketing strategy.

A: Perhaps not just a marketing strategy, but certainly a development that’s beneficial for her marketing strategy. I’ve no idea what Beyoncé genuinely thinks and feels. Who does? Her interviews are typically not enlightening and she is not discussing either the Super Bowl show or the video. As in the past, she lets others generate publicity for her.  The former Mayor of New York Rudy Giulani screamed it was “outrageous” she used the Super Bowl “to attack police officers, who are the people who protect her and protect us and keep us alive”.  America’s Saturday Night Live show has parodied her with its “Where were you #TheDayBeyonceTurnedBlack?”

Q: As you’ve argued before, celebrities today thrive on controversy and the kind of scandals that would have ruined the careers of film stars and rock singers in the twentieth century. Presumably, this is no different.

A: I suspect this is a calculation more than a gamble. Beyoncé is so globally adored that it’s difficult to think of any kind of scandal that would hurt her. She can say or do pretty much as she pleases and get away with it. The kind of conditional status that applies to most other black celebrities simply doesn’t work with her. She’s never said she is black, anyway. I’ve no doubt that she won’t clarify her intentions any time soon. Anyway, she’s too busy selling us stuff. But stuff isn’t the same as an end to racism — and this is my long answer to the main question. Celebrities can draw attention to big issues and can, in some cases, force the media to take notice. But there are limits to their influence. Beyoncé is a prodigious seller of merchandise, but thoughts are harder to sell than lipstick and breakfast cereal. 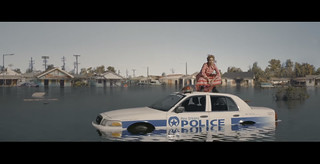