The recent announcement by German player Thomas Hitzlsperger that he is gay has once more raised the question of why more gay footballers do not feel confident enough to come out. I’ve conducted research on the subject which reveals what prohibits gay footballers from coming out 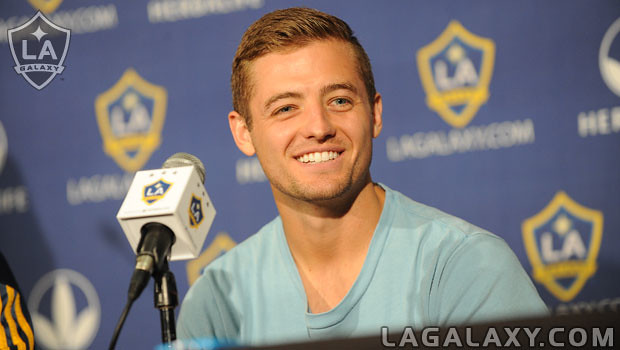 When Marcus Urban revealed how, during his professional football career, he lived in fear of having his sexual orientation made public, it surprised no one. The once-promising East German youth international played in the 1980s, after all. Only one prominent athlete was known to be gay: Billie-Jean King’s sexuality became public in 1981 when she was sued by a former lover, who also worked as her secretary. Other gay athletes cautiously waited for the fallout from King’s revelation. Three decades later, there are openly gay athletes, not only in tennis, but in most major sports, even the traditionally macho sports like boxing and rugby. Yet Urban’s sport seems to have preserved its prejudices, as if in aspic. In the entire history of the sport, only two professional players have declared themselves to be gay during their competitive career. English player Justin Fashanu came out in 1990 after threats by a newspaper and, more recently, American Robbie Rogers (pictured above) retired, came out, then resumed playing, making him the only openly gay professional footballer (Anton Hysén, is also outspokenly gay, though he is a semi-professional in a minor Swedish league).

Is football out-of-step with other sports? Is its culture anachronistic – conspicuously old-fashioned? Or are there other, hidden factors that prohibit gay players from being honest and maintain the code of silence that proved such a torture not only to Urban, but to countless other gay footballers? There are gay footballers, probably hundreds if not thousands of them. Why do they not come out? The popular reason is: the hostile reaction of fans. The explanation may have been credible in Urban’s time, but are today’s fans ferociously opposed to gay players? No: in fact over 9 out of 10 fans insist homophobia has no place in modern football. The absence of gay professional players is becoming an embarrassment – it projects the misleading impression that football culture is mired in bigotry. This is not opinion; it is the conclusion of a study of 3500 fans I conducted with my colleague Jamie Cleland. While fans emphatically rejected that they harboured unfriendly feelings towards gay players, they understood the reasons why they were conventionally identified as the cause. They are easy targets who rarely have the opportunity to answer back And there is logic in what they argue: when Puerto Rican boxer Orlando Cruz and Welsh rugby player Gareth Thomas (below) came out, fans were indifferent, unconcerned about their private lives. Football fans would respond similarly. Because there are no openly gay players outside the USA’s – and I do not intend this to be insulting – somewhat insignificant Major League Soccer, we cannot test this argument.

More plausible explanations lie inside the football industry, where agents and clubs are always sensitive to the market. Agents earn their living from commissions derived from their clients’ (that is, players’) earnings. It is probable that they persuade gay clients not to gamble, at least until their careers are at an end. Clubs are conservative institutions and wish to preserve a status quo that has endured, in some cases, for over a century. “The club with a gay player” is probably not a label relished by football clubs. While officially clubs condemn homophobia and other types of discrimination, it is easy to imagine how they advise players to remain in the closet … at least until they move to another club, or retire completely! While this state of affairs persists, fans get the blame and the real culprits stay hidden. So the scarcity of gay players provides a spurious evidence of the presumed malevolence of fans. And fans can do nothing to destroy a myth that has been in football at least since Urban’s time.

* This is a translation of the author’s article, which was published in the January 2014 edition of the German cultural affairs magazine Kulturaustausch

WHY HAS TOM DALEY CAUSED SUCH A SPLASH? 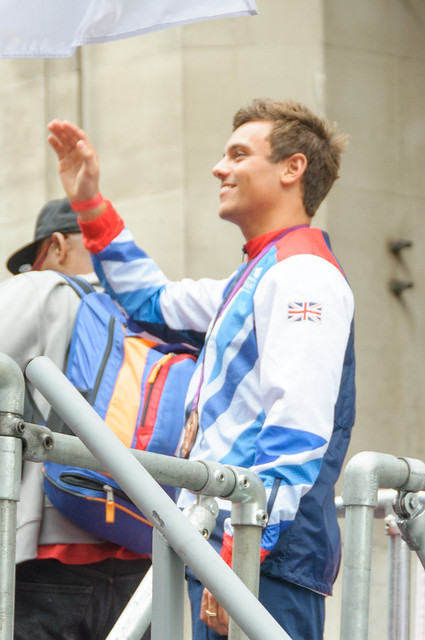 Q: So what’s all the fuss about Tom Daley, the 2012 Olympic bronze medallist?

A: He’s recently announced via a tweeted video that he’s gay.

Q: I thought we already knew that.

A: Well, there have been rumours circulating for a while and many people have, I think, assumed it. But Daley reckons the rumours have turned nasty, so he thought he’d go on record, so to speak.

Q: Will it hurt him?

A:  Not at all. His fans are not going to desert him. The advertisers who use him to endorse their products won’t drop him. And itv will appreciate the publicity bonus for the new series of Splash!

A: Because there is still a degree of risk involved when an athlete, or, for that matter, actor, rock singer, politician or any person in the public eye comes out. They can’t be 100 per cent sure there is going to be approval. For instance, Britain’s first sex-change parliamentarian, the UKIP MEP Nikki Sinclaire has told how she was born a boy but had gender reassignment surgery on the NHS 18 years ago. This was big news and, let’s faces it, with some justification: it was unusual. But Sinclaire has not been on the end of a sharp backlash, has she?

Q: So you think the days of bigotry and homophobia are gone?

A: I didn’t say that. Enlightenment hasn’t spread to all parts of the world. In Qatar, where they are intending to play a football World Cup, homosexuality is still a punishable offence. In Russia, where there is going to be a winter Olympics, there are laws against which people have been protesting recently. And there are many other parts of the world mired in old-fashioned prejudices. I guess you have to believe that sport can be a force for good and work to change the mentality in such parts of the world.

Q: Football is the most popular sport in Britain and, indeed, the world. Yet, to my knowledge there is only one openly gay player and he’s playing in California in a league that doesn’t really have much impact. Right?

A: Yes, Robbie Rogers plays in Major League Soccer. Previously, he’d played for Leeds United. Now if he had chosen to come out while at Leeds, it would have been interesting to discover what the reaction would’ve been. My guess is that it would have encouraged some acerbic banter from opposing fans, but nothing too malicious. I’ve done research on this subject and over 90 per cent of football fans oppose homophobia and want to get rid of this reputation they have for being homophobes. The only way they can prove this is by not responding to a gay player in the way many people expect.

Q: You have to be kidding. You’re not seriously suggesting that a player in the Premier League or Championship could declare himself to be gay and not get what football fans call “stick,” are you?

A: Stick is typically bantering. OK it can be a bit caustic at times, but it is generally good-humoured and often quite witty. Fans visiting Brighton often chant, “Does your boyfriend know you’re here?” or, “You’re standing up ‘cause you can’t sit down!” I don’t think these are malicious. And frankly I don’t think gay people are offended by this kind of ribaldry.

Q: One more question: would advertisers run a mile?

A: Quite the opposite: imagine the brand value of “the Premier League’s first gay player.” I would think any gay player who comes out as gay would have great marketing potential. Anyway we’ll find out soon. I predict a gay footballer in Britain will come out over the next couple of years. @elliscashmore

The Crown Prosecution Service’s new initiative aimed to tackle, among other things, homophobia in football is badly conceived, poorly planned and misdirected. “As well as tackling violence, disorder and criminal damage, we will deal robustly with offences of racist and homophobic and discriminatory chanting and abuse and other types of hate crime,” says the CPS

Most of these are already punishable offences, though the issue of “homophobic” chanting and abuse is new. With my colleague Jamie Cleland, I’ve conducted research on the supposed homophobia among football fans: contrary to popular wisdom, a huge majority of fans oppose homophobia and think it has no place in football. In fact, most fans welcome the day a professional footballer will have the confidence to come out in Britain. There is only one pro player who is openly gay and he plays in America’s Major League Soccer.

Just under 10 per cent of fans questioned in the survey of 3500 fans expressed hostility to homosexuality and resented any liberalisation in attitudes towards gay players witnessed in other sports.

Nearly a quarter of all people playing, coaching or refereeing professional football personally know a gay player. This suggests that gay players are known inside the football industry, but are afraid to come out. Why? If it’s because of the possible reaction of crowds, they have nothing to fear. Gareth Thomas, a former Wales rugby union captain who later switched to rugby league, declared he was gay while still at the peak of his professional career. In only one instance did fans react with hostility; for the most part he was not subject to homophobic abuse.

Football fans barrack all players and, it’s true, they often use language that qualifies as homophobic. But in the occasionally baffling logic of football fans, this does not mean they hate, dislike or disapprove of gay players. It is, in the fan’s jargon, “stick” —  sharp but playful remarks designed to put opposing players off their game. There is, for sure, homophobia in football, but it lies in boardrooms and in the offices of football agents. Gay players are being persuaded that it’s in their best interests not to reveal their sexual preferences while they are still playing football professionally. Football clubs may fear the brand implications of being known as the first club in the English or Scottish leagues to have an openly gay player. Agents are no doubt wary of the effects on sponsorship deals – remember agents earn their commission on players’ earnings. The publicist Max Clifford, who is rumoured to have been consulted by at least three gay professional footballers, has revealed that he has advised footballers not to come out because the sport is “steeped in homophobia”.

Of course, it’s much easier to blame fans and introduce tough measures to silence them. Football will soon follow other professional sports and see some of its top players come out: in recent years, rugby union, hurling and tennis have seen star players reveal that they are gay while at the height of their careers.  It is not fans who are stifling them. The taboo surrounding gay players in football is a myth.