Twenty-five almost to the day after the Hillsborough disaster, a fresh inquest has begun. It is expected to last up to a year and may finally bring a definitive conclusion to a landmark event that has become part of the collective memory of all Brits and perhaps every football fan in the world. Above is a recent interview I gave to Australia’s ABC Radio, and below an extract from my book Sports Culture: An A-Z Guide. 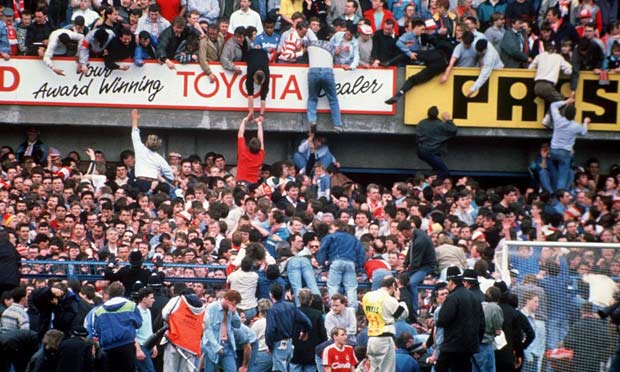 A total of 96 Liverpool fans died as the result of a tragedy at the Sheffield Wednesday soccer club’s stadium on April 15, 1989.  It was found that 658 too many spectators could have been allowed into a section of the Hillsborough stadium.  Fans were crushed; it was also discovered that wrongly-sized barriers were fitted. The disaster, which was witnessed on television by many relatives of the victims, took place prior to a game between Liverpool and Nottingham Forest in the semi-finals of the Football Association (FA) Cup.  In an effort to relieve a crush outside the stadium, the police ordered a large gate to be opened, allowing hundreds of fans to pour into the overcrowded enclosures at the Leppings Lane end of the stadium. A government inquiry into the incident, chaired by Lord Justice Taylor, laid the blame squarely on the South Yorkshire police, who, he concluded, failed to plan for the arrival of large numbers of fans.  But, to the fury of relatives of the deceased, senior police officers refused to admit at the the inquiry any responsibility. Rumors that Liverpool fans caused the crash by arriving at the stadium late, drunk and without tickets compounded the grief of relatives.   At the inquest, held in 1991, the coroner refused to admit evidence relating to events later than a cut-off point of 3.15pm on the day.  The jury returned a verdict of accidental death. Two years later, families of six of the victims applied for judicial review, asking the High Court to quash the verdict and order a new inquest that could lead to a verdict of unlawful killing.  It was refused.  But, in 1996, a television docudrama Hillsborough uncovered new evidence suggesting that the police must have known the severity of the overcrowding when they opened the gate.  A closed-circuit camera was said to have been working, contrary to evidence at the inquest: the police video and new medical evidence disclosed in the television program precipitated a review in 1997 to establish whether a fresh inquiry was justified.  This was ruled out in February 1997.
A disaster comparable in kind and scale to Hillsborough occurred in Guatemala City on October  16, 1996 when 82 people died beneath an avalanche of bodies at a World Cup qualifying game between Guatemala and Costa Rica.  A crush in a tunnel and fans trapped at against fences at the densely-packed Mateo Flores stadium evoked parallels with the Sheffield tragedy. Fifa speculated that forged tickets may have triggered the crush: fans holding tickets were denied entrance, so kicked down an entrance, causing fans inside to cascade down to lower levels. In both cases, there were fences that effectively prevented the free movement of spectators and no monitoring of crowd density inside the stadiums.  This pair were but two of a series of stadium disasters that have occurred through the twentieth century.   Ibrox Park, Glasgow, was the scene of tragedies in 1902, when a stand collapsed and 25 fans were killed, and in 1971 when 66 died after barriers gave way.  In 1968, 74 were killed when fans headed toward a locked exit and were crushed against the doors.  49 people were trampled to death in a Cairo stadium in 1974.  In 1985, 39 people died at the Heysel Stadium, Brussels; hooliganism was blamed.  A grandstand collapsed at Corsica in 1992, killing 17 spectators.  But, the worst sports tragedy occurred in 1982 in Moscow where a reported 340 people were killed at a European Cup soccer game.