Q: What have the Paris Métro and the Oscar nomination list in common?

A: They’re for whites only. At least, it seemed that way this week. Chelsea fans forcibly prevented a black passenger from getting on the underground train as the proudly proclaimed they were racists after last Tuesday’s game in Paris (video above). And in the altogether more civilized environs of Hollywood, the Oscar ceremonies disregarded black artists, directors and production personnel, opting for all-white nominees. This surprised many considering the strong reviews for the movie Selma, directed by Ava DuVernay (pictured below with actors David Oyelowo, right, and Common). The snub wasn’t the result of some conspiracy to exclude African Americans. 12 Years a Slave, a film by a black director about black history, won best picture last year. But the absence of black people from this year’s awards, coming so soon after a series of incidents in the US in which young black people have been hurt or killed, seems to magnify how the so-called “race issue” did not disappear with the election of President Obama and the coming of the “colour blind society.” 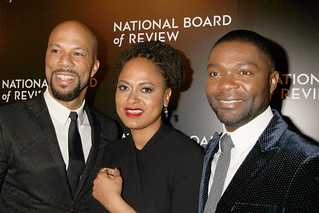 Q: I guess, in the same way, we have been lulled into assuming the same “race issue” has gone from football. Some people can remember the late 1970s and 1980s, when black players first appeared in British football. In those days, the players were barracked and racially abused and it was commonplace to see far right political movements recruiting outside football stadiums. The kind of incident we saw in Paris could be seen on the streets of Britain all the time, some of the perpetrators being skinheads. Did it go, then come back, or has it never really been far away?

A: Racism has not been a constant presence in British football. It certainly declined in the early 1990s with the rise of the Premier League and the great black players who became stars of the game. The sport became glamorous and, for a long period, it did look like its racist history was just that — history. But, since 2011, there has been a constant stream of incidents, some on the field, some among the fans, and many in social media, that have reminded us that racism has been lurking not far beneath the surface. Now it appears it has returned to visibility.

A: Almost. But consider this: football and Hollywood are, in their own, different ways, cultural institutions, started by white men (not women) and intended, largely, for other whites. Even in the early days of Hollywood, there were few opportunities for black actors and audiences were typically white. Today the academy that awards the Oscars has been around 93 percent white, 76 percent male and an average of 63 years old. Football is a little older than Hollywood, emerging in the 1860s in England (at least in the way we understand the sport), while Hollywood’s film industry emerged in the early decades of the 20th century. Again, the people who played the game and those who watched were almost exclusively white. There is still what we might call a white establishment in football: it is governed mainly by white men. So we shouldn’t be misled by the number of black players we see in the modern game. The hierarchy of football is dominated by whites. You only have to remind yourself about the recent debate over the scarcity of black managers and the debate over the Rooney Rule to understand how black people in football are meant to be strictly players and not in positions of authority.

Q: So has there been no progress?

A: Oh yes, plenty. But you have to bear in mind that slavery was around in the 1600s and the kind of beliefs and attitudes we associate with racism have been forming, not just for a few decades, but for centuries. I think it’s foolish to think racism is a single mindset that has been frozen in time: compare the situation now with how it was in the UK in the 1980s, for example. The point is that racist ideas are like fingerprints: even though we sometimes can’t see them with the naked eye, their impressions or marks are still there and, under certain conditions, they become visible. Obviously, they were in evidence in Paris. Less so in Hollywood, but perhaps the absence of black people from the Oscars is just as powerful a reminder that we shouldn’t be complacent about racism: it needs to be opposed in its every manifestation.

There appears to be an outbreak of depression. Is it a sickness … or something else? 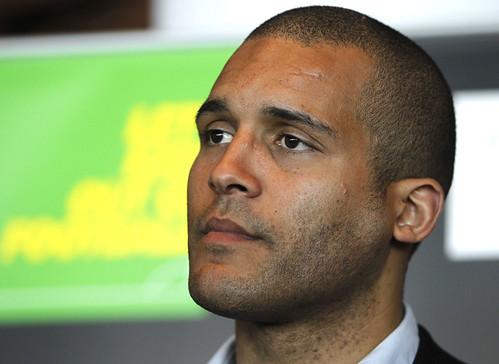 Q: So depression is back in focus again. Clarke Carlisle (pictured above), the former footballer and ex-chairman of the Professional Players’ Association, has said he tried to kill himself by throwing himself under a lorry last December. He said he’d been suffering from depression. And Coronation Street has been featuring a story about Steve McDonald (played by Simon Gregson, pictured below) trying to get to grips with his depression. Corrie is, as usual, tackling a serious social issue and Steve’s condition seems authentic. So my first question: Who is immune to depression and will never experience the severe despondency and dejection that typically come after some kind of disappointment but seem to stick around too long and become a general feeling of hopelessness and inadequacy?

A: No one. It’s a quick answer to a long question, but it’s the truth. It doesn’t matter how successful you may be, you can still suffer depression. Reminders that life is worth living and that others are far worse off make little impression: reasoned arguments carry no weight when balanced against a complex of irrational anxieties with multiple origins. In fact, many of the most conspicuously accomplished, intelligent, imaginative and all-round successful people have suffered from this sort of condition. Brooke Shields, Elton John, J.K. Rowling, Morrissey, Sheryl Crowe are among the legion of contemporaries. Historically, artists and dignitaries and, such as Ernest Hemingway (1899-1961), Tennessee Williams (1911-83), Paul Gaugin (1848-1903), Vincent Van Gogh (1853-90) and Winston Churchill (1874-1965) experienced moods that weren’t at the time called depression but had many of the characteristics. As you know, one of my guilty pleasures is Sherlock Holmes and he was a depressive. In A Study in Scarlet Conan Doyle describes the first meeting of Holmes and Dr. Watson in 1881. The great detective explains: “I get in the dumps at times, and don’t open my mouth for days on end. You must not think I am sulky when I do that. Just let me alone.” So it seems Holmes suffered from depression; he just called it “the dumps.” 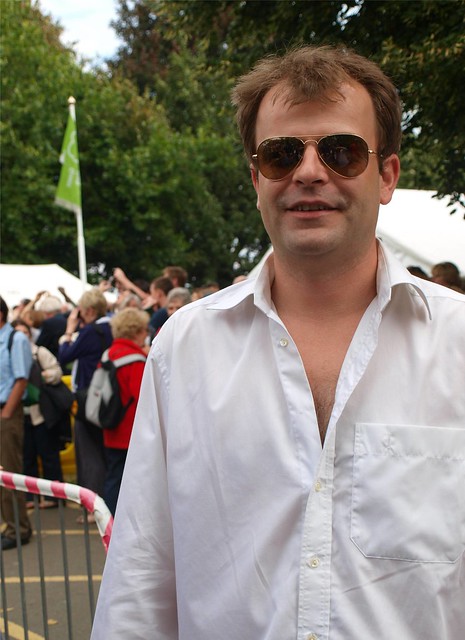 Q: So what exactly is depression?

A: The Word Health Organization (WHO) describes depression as “a common mental disorder” i.e. an actual condition rather than just a set of symptoms. WHO characterizes the condition “with depressed mood, loss of interest or pleasure, feelings of guilt or low self-worth, disturbed sleep or appetite, low energy, and poor concentration … At its worst, depression can lead to suicide, a tragic fatality associated with the loss of about 850 000 lives every year… the leading cause of disability… affecting about 121 million people worldwide. People with depression may experience a lack of interest and pleasure in daily activities, according to the American Psychological Association (APA). And MedicineNet.com notes that these may include “activities that were once interesting or enjoyable, including sex.” The despondency and dejection typically felt over a period of time are often accompanied by weight loss or gain, insomnia or excessive sleeping, lack of energy, inability to concentrate, feelings of worthlessness or excessive guilt and recurrent thoughts of death or suicide. The experiences of persistent sadness, hopelessness, worthlessness and guilt are also possible. Particularly pernicious is the unusual fatigue that is often accompanied by low energy levels; disturbed sleep patterns and a difficulty in concentrating, remembering, or making decisions. There can also be physical symptoms, such as headaches, digestive disorders, and routines pains that do not respond to treatment. Alcohol or drug abuse may be signs of depression; Carlisle confessed that he had an alcohol dependency. The two major types of depression have been distinguished as Dysthymia, a persistent, mild depression lasting for at least two years with symptoms never disappearing for longer than two months and milder cyclothymia.

Q: It’s unlike you to accept medical definitions. What are your own thoughts?

A:  The word depression wasn’t part of the medical vocabulary before 1987. That was the year in which the Eli Lilly pharmaceutical company introduced the drug fluoxetine onto the market. Its brand name was Prozac. Up till then people went to their doctors with “anxiety” or “nerves” and were usually prescribed tranquillisers such as Valium (the trademark for diazepam, muscle-relaxant drug.) Originally developed for high blood pressure, then as an anti-obesity agent, fluoxetine was tested on patients with severe mental disorders in which thought and emotions were so impaired that communication was extremely difficult if not impossible. The condition of most these psychotic patients remained unchanged and deteriorated in some cases. Then the fluoxetine was tried on five individuals with milder conditions and it seemed to cheer them up. More testing began in earnest. Today, about 54 million people around the world habitually take Prozac, which is just one of several prescription drugs known collectively as antidepressants. Between 1991 – i.e. four years after the introduction of Prozac – and 2001, depression in the USA more than doubled. It seemed more than a coincidence. According to the World Health Organization (WHO), depression is set to become second only to heart disease as the world’s leading disability by 2020.

Q: So, if I understand you correctly, you’re saying we invented the drug first, then created a medical condition that it was capable of treating.

A: Depression might not have begun in the early 1990s, but its official recognition as a sickness that could be clinically diagnosed and treated with medication marked the start of depression as we know it.

Q: That sounds a somewhat cynical appraisal. Is it?

A: I don’t think so. Most medical conditions are defined by their treatment. Clearly, there are a theoretically countless number of sicknesses; the ones we have identified as treatable we have named. For example, I was watching BBC2’s Wolf Hall and was interested to learn the central character Thomas Cromwell’s wife and daughters died suddenly and without obvious symptoms. Apparently, they died with what was called sweating sickness, which appeared around the end of the fifteenth century; it disappeared in 1551. But we still don’t have a name for the disease, which was, in practice, untreatable. Our understanding of illness depends on how the medical profession defines it. Now, it has defined depression as an illness and prescribes treatment accordingly.

Q: So it is an illness, right? I mean, people are always saying we should approach it as we would a broken leg or influenza or any other kind of malady. That way, we remove the stigma associated with mental illness. That’s a good thing, surely.

A: Yes, if it promotes a more open approach to the subject, then, obviously, it must be a good thing. Many people who have suffered from depression have been encouraged to talk freely about their condition and seek ways of shrugging it. I just think we should recognize that depression is not actually like a broken leg or cancer. Its causes are often difficult to discern: depression has multiple origins in the life experiences of the people concerned. I know some people will offer the simplistic view that depression is just a neurochemical imbalance that can be fixed with drugs. It can be managed by drugs, perhaps. But the sources of depression are complex and, often, unknowable. So, on balance, I don’t object to the comparison with physical complaints. But I think we should see physical conditions as metaphors, that is, to highlight similarities. Depression is not a physical sickness.