Q: Nowadays, do-gooders are everywhere; they line up to get our attention. But I wonder if Trevor Phillips (pictured below) is trying to do any good at all. Apart from give his own reputation a boost, of course. I mean, he’s been on tv urging for more openness on the issue of race. He’s discovered a lavish opportunity for showcasing his gamekeeper-turned-poacher turnabout. The Labour Party made him a member of its London Assembly in 2000, and three years later he became head of the Commission for Racial Equality. So he used to promote the policy of multiculturalism he is now criticizing.

A: Well, hang on a minute: that’s not quite true. His support for multiculturalism hasn’t suddenly disintegrated. He had reservations of Tony Blair’s approach to the policy, which he thought would lead to a kind of ethnic isolationism. 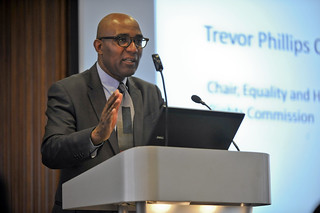 Q: Unlike the American policy that’s encouraged the acceptance of core values and the cultivation of sort of hybrid identities, like African-Americans or Asian-Americans, for example?

A: Let’s remind ourselves that the USA’s policy has not exactly been a runaway success. We only have to glance across the Atlantic to remind ourselves that, despite ending segregation 50 years ago, introducing affirmative action, or positive discrimination, and even electing an African-American to President, America has more than its fair share of racially-charged episodes. In the 1980s, Britain feared Britain was going to follow the US: the riots in London, Birmingham and other cities (see picture below) seemed to reflect the riots in America twenty years before.  So the British pursued its own policy: ethnic difference was welcomed and those who wished to preserve their distinct identities through their language, faith, customs and overall lifestyle, were put under no pressure to assimilate, that is become absorbed into the wider society. Phillips argues now — as he did then — that this was a mistake and has led to the cultivation of distinct ethnic groups with little in common. Of course, the American approach has been fraught with problems and, in recent years, we’ve seen evidence of this.

Q: But, as I understand it, Phillips has been saying we’ve deliberately ignored the race issue, abiding by a kind of code of silence.

A: He exaggerates: I don’t think we have been unduly silent about race in the UK. Think about the Stephen Lawrence Report’s publication in 1999. It prompted a heated debate for years. And, when Phillips argues, we were silent about the sex exploitation cases in Rochdale and Rotherham, I think he forgets that, while there were Asian gangs behind many of these cases, we all knew about this. We also know that several whites, sometimes prominent whites, have been involved in similar activities. I get the impression that we talk about these issues. Occasionally, we hear about cases of the police protecting the identities of Asian sex grooming outfits secret; there was a case in Birmingham last year, but the truth eventually reached the headlines with “High number of Asian child sex abusers in Birmingham” I doubt if this is likely to persuade anyone that all British Asians are involved anymore than hearing that Victoria Climbie’s parents were African was going to convince anyone that all Africans are child-killing black magic worshippers. So I don’t think we are as silent as Phillips supposes. In any case, I doubt if there is any benefit in making our thoughts and feelings too well-known. Sometimes, free speech can hurt. That’s the reason the Wigan Football Club owner Dave Whelan got into hot water when he made a reference that had an antisemitic implication and then compounded this with an racial epithet about Chinese.

Q: But I was reading recently that the US Army  is investigating a platoon of soldiers, who were given a free pass to use racial slurs against each other during what was known as “Racial Thursdays.” And, in any case, we have laws against “inciting racial hatred.”

A: And this is why I think a code of silence is sometimes preferable to, as you say, a free pass to express your opinion. When Phillips says we have to be ready to offend each other, he should think of the consequences. I’m in favour of freedom of speech, but you have to stay mindful that it’s a potent power. The balance is a fine one: you have to limit the kind of speech and expression of thought that will impact negatively on the life of others. Clearly, there are people around who harbour racist ideas and we have to accept that they will cling to these. In practice, we can’t do much about that, at least not without some form of thought control. What we can do is impose limits on their behaviour: to prevent them harming innocent people.

Q: So you’re actually managing racism rather than addressing it?

A: It sounds defeatist when you put it like that. But that’s about right. I think we should spend our energy on protecting groups. In time, changes in attitudes will follow. But it’s a glacially slow process. The first significant manifestations of racism were in 1958 at Nottingham and London’s Notting Hill and the fact that we’re still discussing it suggests the rate of progress is not impressive. I think managing race is the primary task.