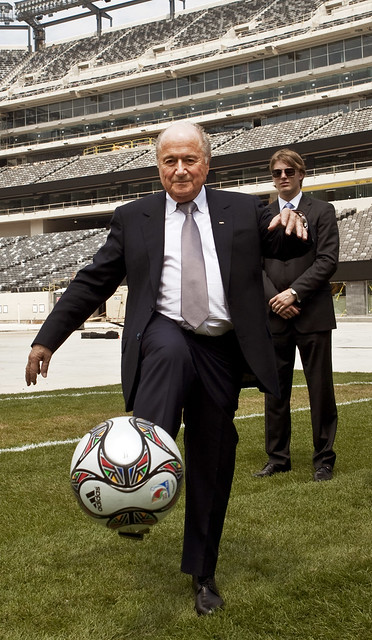 A: Yes and possibly: it’s too late to change Russia, but the current investigation into Fifa will probably lead to revelations about how the bidding process for the World Cups was flawed by corruption and bribery and this could force Fifa to change the host nation for 2022. Qatar is already an unpopular site, anyway. Head of the English Football Association Greg Dyke doesn’t think Fifa president Sepp Blatter (pictured above) will survive his next full term of office (4 years) and he’s probably suspecting the trail of the current FBI case will lead all the way back to 2010 when the results of the Fifa vote for the World Cup hosts were announced.

Q: I heard you talking on radio last week and you seemed to think the big sponsors, or Fifa’s partners as they call them, would wonder whether their own brands are likely to be tarnished by their associations with Fifa. I guess you mean the likes of Coca-Cola, Budweiser, adidas, McDonald’s and the others, right? Surely they’re big enough to survive the latest scandal.

A: No doubt about it, though Visa, one of the major sponsors, has expressed doubts about Fifa and publicly declared that it will ask the organization to account for itself. Visa and each sponsor pay roughly $30m a year to be featured on official Fifa merchandise and have their logos plastered all over the screen when the games are being played. These global brands don’t throw money at Fifa out of the goodness of their hearts: they get good value from the exposure.  If they thought they’d suffer, they’d pull their money in a heartbeat. I imagine several others besides Visa will make pronouncements over the next week or so, but they’ll probably declare that they’re holding meetings with Fifa and expecting to get assurances that the type of corruption we’ve been hearing about will be stamped out. The usual anaemic platitudes, in other words.

Q: Were you surprised Sepp Blatter retained his presidency, despite the turmoil 48-hours before the election? His credibility must have been shaken.

A: I thought this initially, but now I’m not sure. After all, he had no credibility in Western Europe anyway. In North America, he was held in suspicion, and the Aussies have mistrusted him since Fifa voted down their bid to host the 2022 World Cup — the one that was awarded to Qatar. By the way, I think Australia will go on the offensive and try to snatch the World Cup from Qatar in the future. So Blatter was never banking on the support of those nations: his friends and stalwart admirers are in Africa and Asia. He can do no wrong with these nations.

Q: You’ve hit on an interesting point here: our media has been scathing about Blatter, but elsewhere in the world they haven’t been so destructive and, as you say, he enjoys support from many other parts of the world outside western Europe, North America and Australia. Why is that?

A: One of the first terms I learned when I was a sociology undergraduate was ethnocentricity (sometimes, ethnocentrism): it means evaluating other people and cultures according to the standards of your own culture. That’s what we’ve been doing. I was listening to Greg Dyke recall how, at last week’s Fifa election, he was talking to delegates from Africa and Asia who weren’t concerned about the allegations and whether they implicated Blatter. It “didn’t worry them at all,” said Dyke, “if you get into a position of power, you take cash.” In other words, there is a more relaxed approach to casual bribery in many parts of the world. It lubricates wheels. We shouldn’t kid ourselves that we’re above this; it’s just that we take a disapproving attitude that’s not so apparent elsewhere. So Blatter isn’t seen as the unscrupulous figure he is over here.

Q: All the same, a change of leadership would’ve made a difference, wouldn’t it?

A: Would it? Again, I’m reminded of my undergrad years: one of the writers that struck a chord with me was an Italian scholar named Vilfredo Pareto (pictured below), who lived 1848-1923, and who analyzed how ruling groups, or elites, clung to their power no matter what the political regime, whether capitalist, socialist, communist or whatever. There are always cliques that rise to the top and engineer ways of staying there. He called it the Circulation of Elites. If he were around today, he’d probably conclude that, in a largscale organization like Fifa, which has reserves of about $15 billion, it really doesn’t matter who’s in charge: the people in positions of power will try to feather their own nest — make money for themselves. Even organizations committed to democratic ideals succumb to the rule of a small, self-serving elite. By the way Pareto was part of a group of scholars known as Machiavellians — after the Italian nobleman and author Niccolò Machiavelli (1469-1527), who advised rulers that, if they wanted to hold onto power they would have to use devious methods. 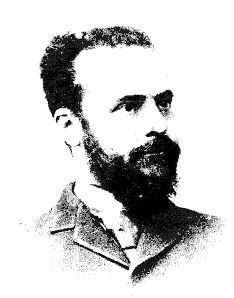 Q: As usual, your cynicism guides your understanding. But what should the nations that are genuinely alienated by Blatter and want to show their disgust at the way he’s governed the football world actually do? There’s talk of a boycott. Will this help?

A: Why leave it at a boycott? If you want to get out, there’s nothing to stop national football federations pulling out of Fifa completely. If say, Germany, Italy and Holland decided to withdraw from Fifa, they would probably expect to be joined by Australia, USA, France, England and a few others. They’d only need eight nations and they could easily get one of the global media corporations, such as NBC, Disney or Fox, interested. One of them would part with $500 million or so for exclusive English language rights. And it would rip the heart out of Fifa’s World Cup. There have been breakaways in cricket, tennis and boxing; and all of those sports survived. So it isn’t beyond the realms of possibility. Michel Platini, the president of Uefa (the European governing federation) is a known critic of Blatter, but we’re not sure how brave he is: he could propose a complete Uefa withdrawal from Fifa. There would be strong dissent from Russia, which hosts the 2018 World Cup, of course. Russian president Vladimir Putin is an outspoken critic of the FBI’s investigation into Fifa. Spain wouldn’t be keen on leaving Fifa either. Even so, the football world could split. The World Cup is as big as the Olympics at the moment, but that could change.

Q: One final question: is this whole affair really so bad for football?

A: No one likes to admit it, but scandals like these keep interest alive: the whole football narrative is populated by notorious characters who indulge in repugnant behaviour that turns the rest of us into moral judges. We like tut-tutting and issuing condemnation; it’s satisfying. When scandals like this make the lead stories not just for a day, but — in this case — for three straight days, we can’t escape them. How many sports can boast as many high-profile scandals as football? Historically, boxing and baseball have come close, but today football is dominant. Scandals make football the most fascinating, exciting, most pleasurable sport of them all. The least interesting aspect of football is the 90-minutes of play! 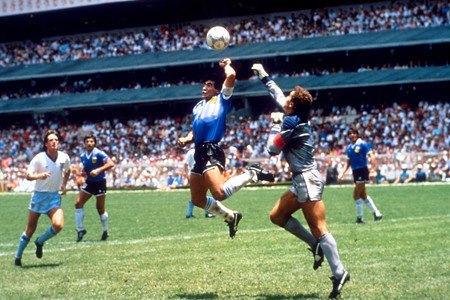 What was the occasion? Quarter-Final of the Fifa World Cup Finals, England vs Argentina

What happened? Six minutes into the second half with the score 0-0, England midfielder Steve Hodge sliced a high ball into the middle of his own area. The ball flew over the penalty spot where it was met by the leaping Maradona, who artfully used his left hand to direct the ball over the England goalkeeper Peter Shilton and into the empty net. England players crowded around referee Ali Bin Nasser in protest and there was confusion for nearly two minutes, none of the 114,580 spectators knowing for sure whether the goal stood. Bin Nasser remained unmoved, so Maradona’s deft, undetected foul gave the South American team a crucial advantage. Television replays initially proved inconclusive, though later analyses showed unequivocally that Maradona — then regarded as the world’s premier player — had handballed, an offence that is today punishable with a red card. Argentina won the game 2-1, Maradona also scoring his team’s other goal. At the end of the match, Maradona exchanged shirts with Hodge, observing etiquette in a way many found ironic. “It was the nearest Hodge got to Maradona all day,” noted several observers wryly.  Later Maradona, when asked how he scored first goal, replied: Un poco con la cabeza de Maradona y otro poco con la mano de Dios, meaning “a little with the head of Maradona and a little with the hand of God.” Hence the phrase, which has now become part of football’s folklore. After that allusion, Maradona never confirmed that he intentionally used his hand. Argentina progressed in the competition and ultimately won the World Cup — though England and its fans will forever remain convinced they won it by foul means rather than fair.

Why did it change football? The old adage, “Cheats never prosper” had never had much resonance in a sport that had been professionalized since 1885, at least officially — players had accepted payments for years before. But even in the 1980s, there was a vestigial commitment to the principle of fair play. Maradona demonstrated the redundancy of such a principle in a sport in which the most fundamental and perhaps only objective was to win. All other principles were subordinated to this. Integrity, probity, honour and decency were, historically, tenets of football, though most had been corroded by commercial considerations as the twentieth century progressed. Had Argentina’s opening goal been scored in a similar manner by a lesser player, the moment would have made news, but not history. Maradona was acknowledged as the finest player since Pelé, and, even in the context of the world’s leading team, an outstanding individual, who commanded the attention of the global media. Handling the ball is, of course, considered one of the crassest of all fouls in football. If the world’s greatest player was prepared to resort to such fraudulence and be rewarded, why would other players hesitate? In the years that followed, players progressively played as if in a competition-within-a-competition, pitting their guile against the referee in efforts to persuade — some would say dupe — the ref into believing that they had been fouled when they hadn’t (known as simulation) or fouling without being detected. Players today often appeal to referees to penalize opponents, an action that would have been unthinkably unsportsmanlike (sic) as recently as the early 1980s. Maradona’s example was, for many, an unwelcome mandate for fouling.

This is the first of a series of iconic moments that shaped football, so feel free to tweet suggestions for future treatments. @elliscashmore/@RaifordGuins