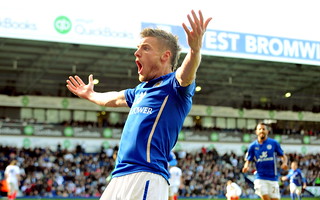 Q: I notice Leicester City footballer Jamie Vardy (pictured above) has apologised for what he calls a “regrettable error in judgment” and will be investigated by the club over a video showing him allegedly using racist language to a fellow gambler in a casino. He called him a “jap” three times. Do you want to hear his explanation?  “It was a regrettable error in judgment I take full responsibility for and I accept my behaviour was not up to what’s expected of me.” What does he mean, “what’s expected of me”?

A: I guess he thinks people regard him as a — and here comes that term again — role model. I can barely think of a term so hopelessly overused in recent years. Let’s just pause and consider what exactly a role model is: a person looked to by others as an example to be imitated. That seems a reasonable working definition. So, who in their right mind regards footballers as exemplary citizens whose behaviour should be imitated?

A: First, because it makes a brilliant story for the media. Sorry to sound crass, but it does. Second, because football’s governing organizations have historically set themselves up as the moral guardians of the sport. In truth the Football Association are proficient in negotiating lucrative contracts with the media, but have no meaningful way of controlling the behaviour of ill-educated young men with incomes comparable with movie stars.

Q: Ill-educated? You sound your typical arrogant self. What right have you got to characterize professional footballers in such a negative way?

A: Football clubs scout players voraciously nowadays. That means with great enthusiasm, by the way.

Q: Let me qualify my use of “arrogant”: egotistical, conceited, supercilious and self-important, too. Move on.

A: As a consequence, they are lining up prospective players at younger and younger ages. At nine, Wayne Rooney was in Everton’s youth team, and he made his professional debut in at the age of 16. That was 2002. Cristiano Ronaldo was played high quality football for Andorinha at 12. Today, it’s the norm to approach players before their teen years. If someone approached you when you were, say 13, and said: “Sign with us and you’ll be a professional footballer the second you leave school. You can order that Aston Martin now, if you like. You’ll have a million in your bank account before you’re old enough to vote,” it would hardly incentivize you to study for your GCSE’s or start applying to universities. Basically, it means you no longer have to study. I didn’t say footballers were not intelligent. Many are. But you’re just not going to be motivated by education when you can earn a fabulous living doing what a great many boys and young men love doing for nothing.

Q: Are the clubs obliged to arrange education for younger players?

A: Yes and several clubs have admirable academies. But, as you know, to get anything out education, you have to be motivated to learn. If you’re head is elsewhere, you’re not going enrich yourself intellectually. And this leaves us with a generation of players who are largely uneducated, bringing me back to the question: who thinks they are role models?

Q: So what are footballers for?

A: To entertain us, and to induce us to buy stuff. The world loves watching football, as we all know. So footballers provide great entertainment. Their other main function is to appear in advertisements for practically every product under the sun. We associate them mainly with sports gear, but just pick any pro player and trace how many products he hawks. The likes of Ronaldo endorse dozens of products. What they don’t do is instruct us. They never offer themselves as exemplary citizens or moral paragons and I doubt if anybody seriously regards them as such.

A: But the implication of what you’re saying is that we should allow players their lax behaviour and forgive them for their trespasses, so to speak.

Q: I wouldn’t go that far. We embarrass, sometimes even shame celebrities from other sports and difference branches of the entertainment industry. Politicians are a bit different because they are meant to be exemplary — well, to an extent. So I think, if a footballer abuses someone and behaves boorishly, then they should be accountable. I just don’t think we — and I mean all of us — should think they have let us down. What else do we expect of them? Every time we learn about an incident like the Vardy case, we start tut-tutting and complaining how the transgressing players have let us all down. They haven’t. If anything they live up (or down, depending on your perspective) to our expectations. Role model is just a term the media like. Nobody seriously thinks footballers are there to be emulated. Heaven forbid if they did.