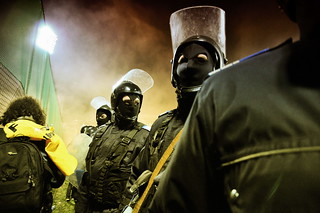 Q: I noticed security at Spain’s El Clasico last week was stepped up significantly following the Paris attacks the week before. They reckon at least 1,000 police were present at Real Madrid’s Santiago Bernabeu stadium for the visit of Barcelona. I know it’s not uncommon for the high-profile derby to be labeled a high-risk game, but usually it happens because of threats of fan violence. This was a direct result of Paris. Is it the shape of things to come?

A: When you consider that, in Germany, three bombs were found inside a stadium during a friendly international football match in Hanover days before the Real Madrid game – the stadium was evacuated 90-minutes before the kickoff – you have to contemplate the possibility that there will be increased security at football games all over the world.

Q: With what consquences?

A: That’s uncertain. At Paris, the targets were public forums: the Bataclan concert and the Stade de France were among them. In a sense, these are obvious targets: several thousand, sometimes dozens of thousands of people in a large but enclosed space. And, of course, highprofile events, by their very nature, attract publicity.

Q: I remember airports in the aftermath of September 11, 2001: the queues seemed endless after additional security checks were introduced. Passengers were obliged to check-in two hours before international flights. Can you imagine anything comparable at football matches?

A: I can imagine it, though I’m not sure fans would stand for it. I too remember the airport queues, though I can’t say I’ve ever seen anyone dispute the need for security. Today, security is even tighter. I don’t think passengers needed much persuading that the security checks were necessary. I wouldn’t want to predict how fans would react if they were told to be in their seats, say an hour before kickoff, and be prepared to wait in queues. Travelling fans in particular would need to set off two hours earlier than usual. It would test their patience. On the other hand, every time I go to an NFL game in the USA, I notice guards patting down and waving a security wand over them (to detect metal objects). Of course, guns are freely available in the US. I’ve never seen a fan object to this. All NFL clubs use mandatory metal detector screening and multiple layers of perimeter security external to the stadium to safeguard fans and the stadium from explosive threats. So I can envisage this type of screening as fans approach entrances to stadiums.

Q: So I gather from what you’re saying that you think fans will just adjust.

A: Well, this is slightly complicated by the fact that fans don’t like a heavy police presence. Some new research Jamie Cleland and I have conducted indicates that fans approve of the softer approach taken by police in recent years. The sight of para-military police patrolling outside stadiums or, worse, the perimeter of the pitch is regarded as a vestige of the bad old days. Fans will respond well to the delays and the queues, and they’ll consent to the unusual body searches. But they won’t like to see the police return to high visibility.

Q: I’m guessing the possibility of airstrikes on Syria is looming large in the minds of football’s organizations.

A: Definitely: airstrikes will almost certainly trigger reprisals in Europe and, after the Paris attacks, football must be bracing itself. Every major sporting event will ramp up security and my guess is that it will be very apparent. There’s no doubt there will be inconvenience for fans. Jamie Cleland and I are asking fans to anticipate what changes may lie ahead. Here’s the online questionnaire: Paris: How will it affect football?