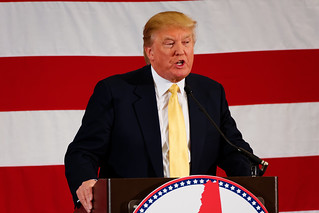 A: If I didn’t think I’d get sued, I’d start writing it myself. Although, in a sense, this is writing itself as we speak. Donald Trump’s political career is so entertaining that it’s hard to dramatize; in fact, were anybody to write the story ten years ago, it would be too preposterous. Today, we’re confronted by a stranger-than-fiction political reality: a billionaire entrepreneur and tv personality decides he wants to take a shot at the presidency of the United States and, against all odds, finds himself in pole position – at least in the Republican Party.

A: Yes: he’s sought and generated support by appealing to popular desires and prejudices rather than by using rational analysis and level-headed argument. Among his proposals are a ban on Muslims entering the USA and a wall built as a barrier between the US and Mexico. These are impractical and unreasonable, but somehow they’ve got traction among the American people and Trump is leading the Republican Party. If we froze the polls today, he’d be the man chosen to run for presidency.

Q: But surely there are other Republican candidates who will overhaul him when the primaries – i.e. the preliminary elections to select candidates for the presidential election – start later this month.

A: Possibly. But his nearest rival, Ted Cruz, has political views not too different from Trump’s. I watched the Republican tv debate before Christmas: the discourse was wholly reactionary. By European standards, America’s Republican Party would be seen as far right. Like the Front National in France or Golden Dawn in Greece. The Republican debates focus on migration and Syria; specifically, how to curb migration and how to attack Syria. Trump’s message has a simplicity and easy-on-the-intellect plausibility that, at the moment, sounds appealing to Republican voters: Trump has 35% support compared to 18% for his nearest rival Cruz.

Q: I suppose all this will play into the hands of the Democrats, who seem to have only the formality of selecting Hillary Clinton as their nominee.

A: It appears so. Hillary’s main rival is Bernie Sanders, who is the most leftwing American politician I can ever recall. Sanders is against the Syrian offensive, opposes the massively uneven distribution of income and wealth, and declares himself an enemy of largescale corporations who exploit consumers. Hillary, by contrast, is a moderate. While Americans see her as a liberal or even a lefty, she is some way to the right of our own Conservative Prime Minister David Cameron. No Democrat besides Sanders would dream of the kind of public expenditure Cameron approves.

Q; Hang on. Cameron is being criticized for cutting public services, isn’t he?

A: Over here, yes. But American politicians realize that this requires higher taxes and this is political poison. Americans would rather see their schools close and their roads riddled with potholes than pay more tax. And, while Hillary supports her fellow Democrat and current President Barack Obama’s healthcare system, she wouldn’t contemplate anything resembling what Americans call socialized medicine, such as Canada’s and our own National Health Service. The USA’s party of the left is some way to the right of our own Conservative Party.

Q: If I hear you right, you’re saying that American politics generally is rightwing. Apart from Sanders, there doesn’t appear to be a legitimate voice on the left.

A: Which is why Trump is sailing serenely. Of course, you have to pinch yourself when you realize this is a man with no political experience at all: he’s never held political office in his life; he’s 69. He wouldn’t be the first President with no political experience, by the way: Dwight D. Eisenhower, who was elected in 1953, was the commanding general of allied forces in Europe during World War II, but had never held political office. In the nineteenth century Ulysses S. Grant was elected following the civil war. Zachary Taylor also had a military rather than political background. So there are precedents.

Q: I guess the question no one can answer is: why would Trump want the presidency anyway? He’s beyond rich and enjoys a certain celebrity status. He’s the guy that started the “You’re fired!” catchphrase, later adopted by Sir Alan Sugar. Trump featured in the original The Apprentice, didn’t he?

A: He did. And he certainly has the kind of celebrity status singers and other entertainers crave. What he doesn’t have is political power. Maybe this is what he thinks will complete his life.

A: I doubt it. In fact, it’s a question how far the largely self-funded Trump proceeds with his campaign once the going gets tough. We can expect him to do well initially, but not well enough once his rivals start picking up momentum. There are twelve candidates in the hunt and it will probably be the end of May before this is pared down to two or three. I doubt if Trump will be among them. By then, voters will have been given a reality check. Trump is an entertainer, not a politician. Republicans will know that Trump stands little chance against the politically savvy Hillary or any of her rivals for the Democrats’ nomination, and put their weight behind someone with credibility. Celebrity culture saturates every aspect of contemporary society, including politics, and Trump shows how far it can take someone even without political skill, training or grounding. But it’s not going to take him all the way to the White House. All the same, I’m looking forward to the musical.