HOW CIGARETTE ADS SNEAK INTO OUR MINDS 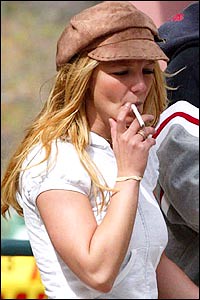 Children and young people are being encouraged to try electronic cigarettes by social media and celebrity culture. At least that was the conclusion of a recent report by Cancer Research UK. The organization doesn’t want e-cigarettes banned. As many ex-smokers confirm, e-cigarettes help wean them off the smoking habit. But Cancer Research UK argues that children should be protected from what it calls the “unregulated marketing” of the products. This has got me thinking: what is “unregulated advertising”? In fact, what isn’t advertising today?

First let’s distinguish between the different types of advertising that surround us. Above the line advertising, often abbreviated to ATL, refers to what most of us understand as advertising: paid-for ads in publications, physical and online, commercials on television or at the movies, and hoardings, posters and street installations. This type of advertising is regulated and is usually clear; in other words, we see recognize it as advertising and know its purpose – to make us buy stuff. Below the line, or BTL, advertising is a little more difficult to identify and this is, presumably, the kind of surreptitiously invasive advertising that concerns Cancer Research UK. It covers all sorts of advertising that can’t, in practice, be regulated. For example, earned media means positioning a brand or product in the public eye, not by paying for advertising space or time, but just by creating or responding to news in an interesting enough way gets the attention of the media. This is valuable exposure and many companies hire public relations (pr) companies with the simple remit to get the company namechecked in the media as frequently as possible.

BTL advertising also includes sponsorships, which ensure a brand name appears in mentions of an event or on the physical presences of people involved (like on the shirts of footballers). This is paid-for, rather than earned, but it’s thinly disguised as something other than advertising. That’s the trick of BTL advertising: to convince consumers they are being agreeably engaged while subtly promoting a brand in their consciousness, though not in a way they would find offensive. But I don’t think Cancer Research UK has any of these in mind. BTL incorporates product placement: watch any movie with a pen-and-paper or your tablet at the ready and take note of every branded product you see on the screen. You will end up with at least 20 names and, in a Bond movie or a Hollywood blockbuster, many more. Car-makers, soft drink manufacturers and IT companies are among the thousands of advertisers who pay to have their products placed prominently in films. The bigger the boxoffice potential of the film, the more valuable the product placement. Television is also fertile territory for product placement: watch for the capital “P” in the corner of the screen, which alerts viewers that branded products will soon be in view. Again, I’m not sure Cancer Research UK have this method in mind.

The organization could be thinking of tweeted endorsements: this involves companies paying celebrities to use twitter to rhapsodize over certain products. Celebrities are paid to tweet enthusiastically about a product. Bosses at itv recently denied allegations that some Coronation Street actors had received gifts or been involved in any “unlawful marketing promotion.” An actor like Brooke Vincent, who has a twitter following of about 400,000 and can boast a certain influential cachet among fans, could be a valuable resource for advertisers. Strictly speaking this form of advertising is now allowed, though it is, for all practical purposes, impossible to regulate: how do you distinguish between a celebrity who genuinely likes a product and wishes to name it, and a celeb who is just paid to namecheck a brand? Unless, of course, you have evidence of pay-offs, which is rare. I don’t know of any tweets extolling the virtues of e-cigarettes though. So what is Cancer Research UK talking about?

The organization has named online promotions, including competitions, apps on phones and discounts of e-cigarettes. But is this a problem? It’s obvious that this is advertising. Were I charged with the responsibility of discouraging smoking, my concern would be with the manner in which the habit is still associated with glamour, elegance, self-confidence and all-round coolness. These associations have held sway since the golden age of Hollywood in the 1940s, when stars such as Bette Davis, Joan Crawford and Clark Gable used cigarettes to enhance their alluring, slinky desirability – and were paid by tobacco companies to do so. Despite all the negative connotations attributed to smoking in subsequent decades, it seems to have retained attractive qualities. What Cancer Research UK might be concerned with is breaking this association. This is no easy task, especially when we think of A-list celebs who make no bones about smoking: Britney Spears (pictured above), Johnny Depp, Paris Hilton are among those celebs. Some will argue that, as role models, they should set a good example. I personally think they can do as they please. But the problem for Cancer Research UK remains.

Whether we like it or not, these celebrities are living, moving advertisements for smoking. But, if I can broaden my point: advertising is simply inescapable today. And I mean BTL advertising that manages to sneaks under our awareness. I’ve mentioned product placement in films and tv shows; but have you ever wondered what’s happening when you watch a game of football? Advertising hoardings at the stadium are in full view, the logos of sponsors are plastered across players’ shirts, the competition probably bears the name of a brand, which is usually referenced by the commentators. If the game is shown on Sky Sports or itv, there are ATL commercials before, after and during halftime. So are you watching a sport or being subjected to a two-hour advertisement? Like an alien abductee, you’re held captive while the advertisers stealthily invade your consciousness. Think about this next time you’re enjoying the game.

Cancer Research UK will be heartened by the new movie Saving Mr. Banks, which not only deliberately avoids product placement for cigarettes, but changes history to accommodate its clean image: the film is about Walt Disney, who was an inveterate smoker, and is played by Tom Hanks. The film has been made by Disney, a studio that operates an absolute ban on screen smoking. Rather than flout its own policy, the studio has chosen never to show its founder lighting up or smoking cigarettes, though he is seen stubbing out a ciggie. Disney also favoured scotch and was famously potty-mouthed, but the film painlessly renders him a more wholesome figure by not featuring him having a drink or uttering a swear word. @elliscashmore