Q: Last week was one for Jeremys. First we heard that Jeremy Clarkson (pictured below) got dropped by BBC, then Jeremy Paxman dominated his interviews with the two main political candidates in the General Election. Let me start with JC: I heard you on radio recently talking about how we licence celebrities to break rules the rest of us stick to. I disagree. It’s nothing to do with us if the likes of Clarkson goes about trampling on people’s feelings and assaulting his colleagues. So your argument is pretty much like everything else you pontificate on: BS. No disrespect. 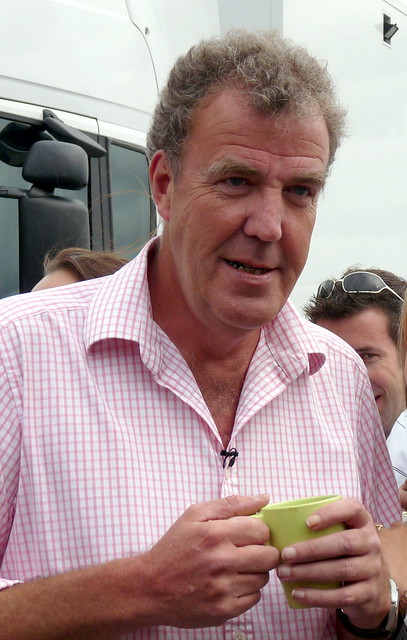 A: Think of all the wellknown figures we follow devoutly but have crossed the boundaries at some point. It doesn’t make them any less fascinating; quite the opposite in fact. Take Tiger Woods’ transgression, as he called it: we actually found him more interesting as a result of his philandering. We thought David Beckham was wholesome family man who would never dare look at another woman before the Rebecca Loos affair. But the episode gave him a bit of devilry as far as we were concerned and that sort of humanized his public image.

Q: So you don’t think because we see a high profile celeb violating acceptable codes of behaviour, we tend to emulate them? After all they are role models, aren’t they?

A: No. Just because Clarkson hits his producer doesn’t mean his millions of devoted fans will ape his aggression. In any case, just think: people who break rules at one point in history are often seen retrospectively as pioneers. It wasn’t so long ago that being gay was a serious violation of social norms, and domestic abuse was seen as a private matter. At the same time, bullying at work was not seen as such a big deal. Now the first is not an issue at all, the second is a matter of social concern and the third is met with, in Clarkson’s case, a dismissal. History doesn’t stand still and nor do social rules.

Q: Which leads me to Paxman (pictured below): he was the star of the show when interviewing David Cameron and Ed Miliband. He dominated the exchanges and pressured Miliband so strongly that he asked, “Are you alright, Ed?” at the end of the interview. Is he a bully? 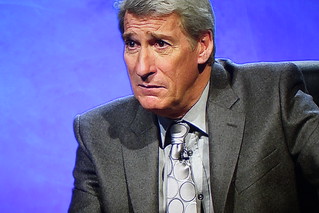 A: Not at all. He’s a self-important figure and he always makes sure no politician is going to steal his thunder. But you have to remember, he’s grilling the men who are aspiring to be the leader of the UK. So I think Paxman is our proxy.

A: He’s acting on our behalf. So he’s asking difficult questions and expects the likes of Cameron and Miliband to be able to answer them. OK, he’s got a research team behind him to design his questions. But we want to see how politicians handle them. Asking Cameron if he knew how many food banks there were was a mischievous one because it’s doubtful if any other politician, or anybody else for that matter, would have the answer at the ready. His insistence on repeating one of the audience’s questions about Miliband’s brother was also below the belt. I mean, Ed is there to answer questions about himself, not whether his brother would make a more credible candidate. But this is Paxman’s stagecraft: he manages to entertain rather than educate us. It was an enjoyable programme, though I can’t say we learnt much more about the two candidates than we already knew.

Q: Is that what you think these televised political debates are for then? Entertainment?

A: You’ll recall I wrote a blog a week or so ago about how politics has been hijacked by tv. Bill Clinton was the first politician to master the transition to pure showman. I don’t think our main candidates are in Clinton’s class. Not yet anyway. Both take their cues from him mind.  Take a look at this from 1992: Clinton is brilliant. I think we learn a bit, though not much, about the politicians’ skills. But the main effect is to entertain us, yes. Television is a wonderful medium for this. I know some think it is an instrument of enlightenment and, on occasion, it can be; but its primary effect on politics is to make them more entertaining. That’s no bad thing, mind: if it gets people engaged, then it’s done its job.

Q: Before you go, what about Zayn Malik? I’ve never heard such a fuss about a guy leaving a boyband. What on earth is all that about?

A: I haven’t got time to explain here, but I’ll refer you to something I wrote the day after the split. See what you think. You’ll probably think it’s more BS! Click here.

Q: What’s all this about?
A: Well, Peter Lilley, the Conservative MP for Hitchin and Harpenden, has been arguing for a relaxation of the laws on cannabis and was spotted wearing a lapel badge in the shape of a cannabis plant; you know, one of those leaf symbols. Anyway, the editor of a regional newspaper, the Hertfordshire Mercury, thought it would be a smart idea to photoshop an image of him, plonking rastafarian-style headgear (it’s called a tam, by the way) on his head.
Q: So? It’s not especially witty, anyway. So why the fuss?
A: Well, it got picked up by a Daily Mail journo, who tweeted it, and the response suggested some people regarded it as offensive, some even called it racist.
Q: Whoaaa! Racist?
A: Apparently. I’m not sure what the logic of this is, but I’ll take a guess: they assume that photoshopping a tam on Lilley implies that the paper is not taking the rastafarian movement and its belief system seriously and, as the overwhelming majority of rastafarian believers are black (there are a few white adherents), then this is a slight against black people. Another possibility is that they object to the immediate association between rastas and cannabis, which is still a controlled substance, despite changes in the law in recent years. So they might think this serves to criminalize rastas and, perhaps, all black people.
Q: But rastas actually do believe cannabis is a sacred “herb,” don’t they?
A: Yes. I’m only trying to think through why people were offended by this.
Q: Let’s face it: we are all much more sensitive nowadays. I was reading recently that Jeremy Clarkson has put his foot in his mouth again and posted a sign saying “Entrance to Slope” on twitter (see below). What’s wrong with that?
A: The word “slope” is derogatory slang for Asians. It’s well-known in Australia and Clarkson probably realized this, though he denied he personally posted it. I think this is different to the Lilley case because, while the word isn’t used outside Oz, it’s a pernicious term and clearly intended to insult Asians.
Q: The fact that you’ve dismissed one case as a storm in a teacup and the other as properly offensive tells me that there is no hard-and-fast rule over these matters. Isn’t is just a case of political correctness gone mad?
A: That phrase is a pathetic cliché and an excuse for not thinking through serious issues (and by the way, “mad” itself is not politically correct). I often ask if people really know what political correctness, or PC, is all about. The main source for PC seems to be French linguistic philosophy, in particular that of Michel Foucault. His analysis was important in pointing out that the production of intellect and imagination represent not so much the capacities of the authors producing them, but the relations of power and the ideologies that define the boundaries of discourse – this being, in very general terms, the context in which the knowledge is produced. Thoughts are not formed in the human mind independently of the language we use to express them. The world isn’t experienced as a series of facts, but of signs encoded in language.
Q: Hang on! I’m getting lost here. You’re saying basically that there’s a link between the way we speak and the way we think. Thought and language are closely related. So, if you change the way people speak, you change their minds.
A: That’s pretty much it. In the early 1990s, PC began its attempt to counter the Western, or Eurocentric, conceptions of knowledge by targeting language. Terms and text did not carry thought; they perpetuated it, often in an unreflected way. Apart from the more obvious cases where “black” or its corollaries were used in a derogatory way and in terms of implied abuse, PC carefully screened out all manner of words, some argue too many. For example, blackboard carries no negative connotations; same with manhole, this isn’t sexist. Any word with a vaguely sexist or racist inference, or one that reflected poorly on disabled persons, the aged, or the young was anathema. Despite the derision typically afforded PC, its influence spread, albeit surreptitiously and sensibly. “Actresses” became actors, to avoid a gendered the term. Flight attendants replaced “air hostesses” or “stewardesses” for the same reason. Comedians specializing in racist material faded away, as did drama that depicted minority groups in baseless negative ways. Well perhaps not completely faded away; I know this guy Dapper Laughs has been in the news recently.
A: I see, so the effects of PC are all around us. I mean, we wouldn’t use words that devalue women or dehumanize ethnic minorities, at least not unless we deliberately wanted to express racist thoughts.
Q: That’s right. So PC has actually been a positive force overall. The problem is when people seem to search out any tiny item that appears to deviate and elevate it into a big issue. Making a big deal of the Lilley case makes everyone grumble so much that, when a genuinely offensive case crops up, we tend to think, “Oh not again.” I think Clarkson takes advantage of this. He probably knows the boundaries and pushes against them, confident in the knowledge that many people will assume he’s essentially a nice guy, but a bit careless. I’m not so sure. No one owes up to being a racist today: we look for instances of racist behaviour — in what they do, say or write. That’s how you judge someone.

PETER MCKAY: Come off it, Clarkson, you wanted argy-bargy