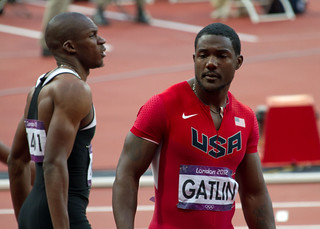 A: Eh? No, I don’t think so. Oh, wait a minute: I’ve got some Nike socks on – I’ve just been for a run. I imagine everybody reading this is either wearing something with the “Swoosh” logo on it, and, if they haven’t, they’re bound to own something from Nike. It’s one of the most ubiquitous and most profitable brands in the world. Forbes rated Nike’s brand value at an incredible $15.9 billion and, only last month, Nike reported $7.46 billion in revenue for the previous three months alone. Why do you ask?

Q: Because I notice Nike has been drawn into two scandals over the past week: Alberto Salazar was the subject of a BBC Panorama investigation into doping and his training base is at the Nike Oregon Project in the USA, where Mo Farah, among others, trains; and Nike has been implicated in the Fifa scandal – according to the American US Department of Justice’s indictment filed against 14 Fifa officials and marketing executives, in 1996, “Company A,” which is now widely accepted to be Nike, agreed to pay $40m in “marketing fees” to the Swiss bank account of an affiliate of Brazilian sports marketing firm Traffic “on top of the $160m it was obligated to pay”, apparently to secure the sponsorship of the Brazilian football team. Traffic billed the company for an additional $30m in fees between 1996 and 1999, according to the indictment.

A: I can’t think of another global brand that has courted controversy quite so often as Nike and yet still emerged, not just intact, but actually stronger. In marketing terms, the company is living testimony to Nietzsche’s dictum, “That which does not kill us, makes us stronger.” Just think about the previous scandals in which Nike has been involved courtesy of the athletes with whom it held contracts.

Nike stood by all but Armstrong and even then stated, “it is with great sadness that we have terminated our contract with him.” His contract was valued at over $7 million per year. In the other cases, Nike has ridden out the storm and suffered no obvious collateral damage. So my guess is that it will distance itself from the Salazar case for the time being and, if the situation demands it, reiterate its stance on doping and remind everyone that its training facility in Oregon is not a panopticon i.e. a structure in which everyone can be observed at all time.

Q: But the Fifa scandal is a different matter, right?

A: Yes, I think so. But remember how Nike managed to navigate its way through the sweatshop controversy. “Nike product has become synonymous with slave wages, forced overtime, and arbitrary abuse.” Who said this? A protester at a G20 summit? Someone from the North Korea Confederation of Trade Unions? Unicef? Actually, it was Phil Knight, the founder of Nike. In 1998, faced with the uncomfortable reality that Nike, despite its position in the market and its reputation as a global brand, was being embarrassed by constant revelations about its treatment of workers across the world. Nike employed nearly 800,000 workers in 52 countries. Ninety-eight percent of its shoes were, at the time, produced in four countries: China, Indonesia, Thailand, and Vietnam. For a long time Nike  it had to defend itself against criticism of its apparent exploitative workplace practices in the emerging world. Nike’s business model is based on outsourcing its manufacturing, and using the money it saves on aggressive marketing campaigns. Nike put its hands up: as Knight’s admission indicates, the corporation was prepared to concede that its early efforts of setting codes of conduct and monitoring compliance didn’t end the abuses across its factories that produced its goods. It needed more comprehensive action. Perhaps more importantly, people believed Knight when he said he was going to pursue this kind of action, augmenting efforts to improve labor conditions with environmental programs.  So it advertised that it was monitoring its outsourcing labour practices and rectifying them and, basically, advertised its way out of trouble. That’s what it does so brilliantly: advertise in a way that persuades consumers that, by buying Nike products, they are involving themselves with a brand that is basically … well, cool.

Q: All the same, the company is going to be hard-pressed to extricate itself from the Fifa scandal, isn’t it?

A: Hard-pressed, maybe. But it’s not beyond Nike to turn a negative into a positive. Think how all the previous scandals have involved or seemed to involve some kind of wrongdoing. Nike can appeal to what we might call unstated sensibilities. For example, people might publicly decry maverick figures, rebels or rule-breakers, but they might also secretly admire them for having the audacity to flout authority. So I think Nike’s cunning advertising creates a way in which consumers can identify with rule-breakers but without openly acknowledging it.

Q: And the Fifa case?

A: The corporation has claimed the overpayments were not bribes or kickbacks and pointed out that the indictment does “not allege that Nike engaged in criminal conduct” or that “any Nike employee was aware of or knowingly participated in any bribery or kickback scheme.” And I have no doubt it will maintain this throughout the coming weeks. As long it remains a peripheral presence in the scandal, it continues to thrive. Like all scandals, there are personal focuses, like Sepp Blatter, Jack Warner and Chuck Blatter. While these are portrayed as pantomime villains, no one will think too much about the more abstract Nike brand. Compare this with another example of potential brand damage: Alton Towers is going to have to work hard to rehabilitate its brand after last week’s crash. Consumers will experience the impact of the event by imagining, “there but for the grace of god …” and this may affect the way they think and respond to the Alton Towers brand. But no one is going to think if they buy a new Nike top or a pair of trainers that they’re suddenly complicit in an attempt to undermine the integrity of a sport they like, or even love. The associations are not immediate. As I argued earlier, Nike’s ability to weather storms is based on its credibility and its preparedness to own up to its own sins and meet the challenge set by the consumer market. My guess is that Nike will emerge unscathed, its position as the world’s market leader in sportswear unchanged.