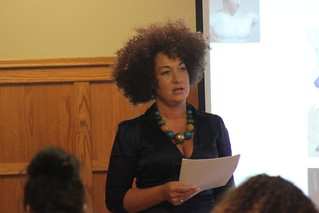 Q: Can a white person be black?

A: Yes. I know the case you have in mind: Rachel Dolezal (pictured above), who is a leader of the National Association of Colored People, and professor of Africana studies at Eastern Washington University, has built a professional a career as a black women; but her parents last week stated that her ancestry was Czech, Swedish and German with a dash of Native American and, while she mixed with and African Americans as a young woman and married an African American, “She’s chosen to not just be herself but to represent herself as an African American woman or biracial person. And that’s simply not true.” That’s what her mother said.

A: Not in the slightest. She’s chosen to adopt an identity as a black person. What’s wrong with that? Barack Obama describes himself as an African American, but he’s never called himself black. Tiger Woods avoids both African American and black and has invented his own identity as Cablinasian – meaning a hybrid of Caucasian, Black, American-Indian, and Asian. So I see us at a stage in history when we’re able to select whatever ethnic identities we choose, maybe several. But it’s a matter of choice.

Q: But surely some people are black and that’s a fact of nature?

A: There is nothing natural about being black or white. Whiteness has origins in the second half of the seventeenth century when English, Irish, Scottish and other European settlers in America began to see themselves not as individuals or members of national groups, but as parts of a race. Most occupied a status not greatly above that of black bondsmen, that is, slaves. The antislavery movement argued that slaves were sentient human beings and deserved appropriate treatment and this prompted slaveholders to defend themselves. Slaves were like livestock, the plantation owners argued, but without anticipating the force of the Quaker-led movement. The need for a sharper, clearly defined barrier of delineation became more pressing as antislavery campaigners grew in confidence. The title of Theodore Allen’s 1994 book The Invention of the White Race conveys the action that followed: whiteness was invented.

There is nothing natural about being black or white

Q: So let me get this straight: slaveowners created whiteness to convince workers from Europe that they had a kind of unifying identity and should stick together and that the slaves, who were descended from Africans, were black.

A: Not quite: whites were persuaded they were part of the same group, but slaves were called a variety of terms, most of them suggesting a natural grouping. Blackness, at least in the sense we understand it today, is a creation of the 1960s, when radical African Americans started to use it.  For example, “Black is beautiful,” and “Black and proud of it.” There’s a tremendous James Brown track from 1968 called “Say It Loud – I’m Black and I’m Proud” (check it out at the end of this blog).

Q: But the fact remains: people who identified as black were and still are African American. Dolezal isn’t. How can you argue against that?

A: In 2011, after splitting up with her partner, a white Canadian, Halle Berry (pictured below) pressed for custody of their daughter. The custody was contested and Berry based her claim on her daughter’s ethnicity: she was black, insisted Berry, drawing on what has become known as the “one drop rule.” This is an old idiomatic phrase that stipulates that anyone with any trace of sub-Saharan ancestry, however minute (“one drop”), can’t be considered white and, in the absence of an alternative lineage – for example, Native American, Asian, Arab, Australian aboriginal – they are considered black. The rule has no biological or genealogical foundation, though, in 1910, when Tennessee enshrined the rule in law, it was popularly regarded as having scientific status, however spurious. By 1925, almost every state in America had some form of one drop rule on the statute books. This was four decades before civil rights. Jim Crow segregation was in full force. Anti-miscegenation laws that prohibited unions of people considered to be of different racial types, remained until 1967, when the Supreme Court repealed them completely. By the time of Berry’s court case, it might reasonably have been assumed that the rule been exiled to America’s ignominious past. Berry herself has an African American father and a white mother, who is from Liverpool. Her parents divorced and she was brought up by her mother in Cleveland, Ohio. Prior to the custody argument, she had declared she considered herself biracial, this referring to a child with a black parent and a white parent: “I do identify with my white heritage. I was raised by my white mother and every day of my life I have always been aware of the fact that I am bi-racial.” 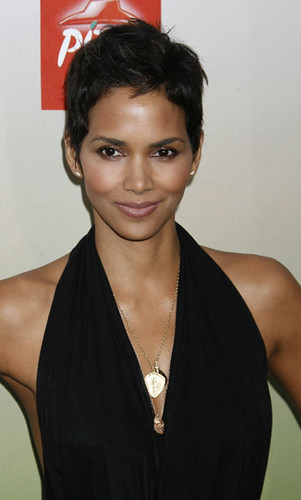 Q: Berry is hardly a controversial figure, but I know she’s occasionally talked about the particular predicament of biracial people, but, at various points, she’s also used black, African American and woman of color to describe herself. She’s talked of how she never felt accepted as white, despite her white mother. Her appeal to the one drop rule seems a bit like a physicist trying to explain the movements of celestial bodies by citing astrology.

A: Actually, while it seemed irrational, Berry’s explanation of her actions was far-removed from any kind of faux biology or pseudoscience. “I’m black and I’m her [daughter’s] mother, and I believe in the one drop theory. I’m not going to put a label on it. I had to decide for myself and that’s what she’s going to have to decide – how she identifies herself in the world,” she was quoted by Chloe Tilley, of the BBC World Service. In resisting conventional census categories, or labels, such as biracial or multiracial, she was not returning to another label black, as if returning to a default setting. Black, in her argument, is no longer a label: it is a response to a label – a response, that is, to not being white. Blackness, on this account, doesn’t describe a color, a physical condition, a lifestyle, or even an ethnic status in the conventional sense: it is a reaction to being regarded as different or distinct.

Q: You’re saying black no longer describes a designated group of people, but the way in which those who have been identified as distinct from and opposite to whites have reacted; their answer.

A: That’s basically it, yes. When Berry allowed, “that’s what she’s going to have to decide,” she meant that her daughter has some measure of discretion in the way she responds. Blackness is now a flexible and negotiable action; not the fixed status it once was. More likely we’ll witness the kind of situation encouraged by Berry, in which ethnicity becomes a matter of choice, people electing their ethnic identities. Note the use of plural identities: Berry’s child may change hers as she grows, perhaps opting for several at one time, changing to suit different situations. It will be – probably already is – possible to have multiple ethnicities, all interchangeable and all utterly fluid. We live a “liquid life,” as Zygmunt Bauman calls it.

Q: For some, this lack of certainty must sound like a waking nightmare. Surely we can’t change identities and switch ethnicities as we change our appearance with cosmetic surgery, replace limbs with prosthetics or restore vital functions with organ transplants from human donors, can we?

A: That’s what is happening and, for this writer at least, it’s no bad thing: the death of blackness will bring with it the demise of whiteness and all the inequity, oppression, bigotry and manifold wrongdoing that whiteness has engendered. Oh, and excuse the plug, but, if you want to read the full version of this argument, it’s all in my book Beyond Black (that’s Halle Berry on the front cover, by the way).