Q: What did you make of Rebecca Adlington’s breakdown on I’m a Celebrity … Get Me Out of Here!?

A: Many of us suspected that Rebecca Adlington was a pretty self-confident young woman who boasts an impressive record of achievements. She won two gold medals at the 2008 Olympic Games in the 400m and 800m, breaking a world record in the 800m final. At 24, she’s accomplished more than most athletes and retired, if not quite at the top of her game, not far past it. Her media-friendly persona is sure to guarantee her work for the foreseeable future and her latest gig on the itv show seems to be a good launchpad. So I’d imagined she was someone who was comfortable in her own body. She’s not there to be admired for how she looks, but how she performs.

Q: So why did she take a pop at her tv rival, model Amy Willerton, and ask, “why not just be a normal girl?”

A: Obviously, she’s been putting on a brave face for years. Social media hasn’t been kind to her: there have been sarcastic – sometimes callous – campaigns ridiculing her over her looks. You can hardly imagine similar campaigns about, say, boxer Carl Froch, or England footballer Steven Gerrard or cricketer Graeme Swann. None of these have Adonis-like looks. They are, to use, Adlington’s term, “normal.” 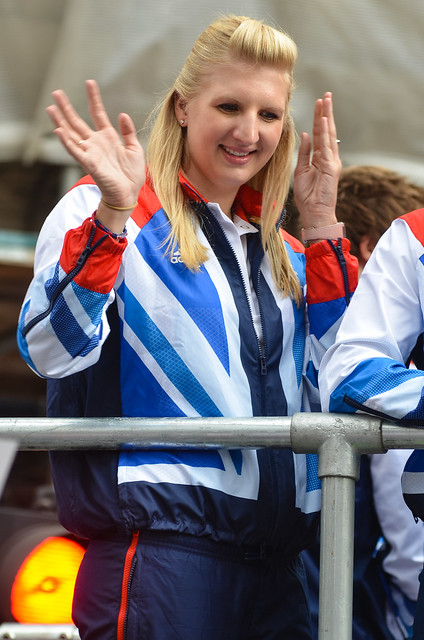 Q: So you could say Adlington has done a disservice to those women who have been arguing for years that we place too much emphasis on physical beauty.

A: And they’d also argue that it’s a particular conception of physical beauty as defined by men.

Q: Has she set back the feminist cause?

A: It’s difficult to be critical when Becky is so obviously upset, but I guess she has disappointed many women. When a woman known for her outstanding achievements dissolves into tears and complains about another woman whose good looks are admired by men, it reminds us just how much importance we attach to superficial appearances. Even a high-achiever who we had all imagined could shrug off her mean-spirited critics as a bunch of jealous no-hopers, has succumbed to what the writer Naomi Wolf once called The Beauty Myth.

A: Indeed. But instructive too. We’ve learned how skin-deep beauty is actually not skin-deep: it reaches right into our psyche, as some might put it. It affects practically everything about us. The body, remember, isn’t just a physical thing, a collection of about 60 billion cells, organized into substances like muscle and tissue, flesh and bone. It is natural and artificial, physical and cultural. We restrain and care for our bodies in order to feel good about our appearance; we work-out and diet in order to improve not just the way we feel, but the way we look.  In other words, we want to believe we look attractive to others.  The often-unstated purpose of cultural imperatives to become fit, healthy and toned is sexual.  An athletic body is a sexy one; a dissipated one is definitely not. We’ve now entered a cultural stage where we have idealized forms of the human body, male and female, to which we are supposed to aspire.  Television commercials, magazines, movies, videos and many other media heave with images of supermodels and hunks, who, three decades ago, would have been regarded as freaks of nature and muscle-bound monstrosities, respectively.  Now many people want to mimic them. Even people like Becky, who most of us admire for doing great things, can be seriously distressed by reflecting on what she believes are her inadequacies. It is, as you say, dispiriting. And by the way: this is an example of the way reality tv shows like I’m a Celebrity … can stimulate great debates about relevant subjects. @elliscashmore